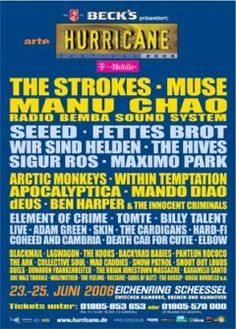 Muse were scheduled to perform after Wir Sind Helden, from 22:00 to 23:00, but their performance was cancelled due to strong wind.

Muse are very disappointed having been forced to pull their headline show last night due to a sudden and extreme storm which started raging 10 minutes before their set was due to begin. The performance was pulled by the festival organisers for safety reasons even though Muse were willing to take on the elements. As the band were walking to the stage the sky turned black and produced an unprecedented thunderstorm. On reaching the stage massive gusts of wind pulled the back of the stage clean off and the crew were found battling heroically with the elements, tying down tarpaulin and attempting to resuce the band's gear which ended up taking a severe lashing. 8 inchs of rain flooded the festival site within 30 minutes, hopefully fans and their tents escaped unscathed.

From an interview with a German newspaper, Musikexpress.[1]

Which was your worst performance?
The Hurricane-Festival was miserable. We couldn’t play because of a Hurricane.