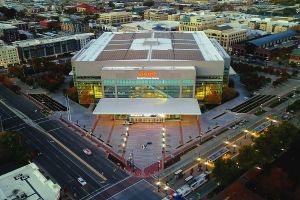 The Vivint Smart Home Arena (formerly known as Delta Center between 1991 and 2008 and EnergySolutions Arena between 2008 and 2015, aswell as Salt Lake Ice Center during the 2002 Winter Olympics) is an indoor multi-purpose arena in the downtown of Salt Lake City, Utah. The arena was designed by FFKR Architecture and was opened in 1991 as a replacement of the demolished Salt Palace arena. The arena's construction was financed privately by Utah businessman Larry H. Miller. It's capacity sits at 18,306. The arena is owned by Miller Family Legacy Trust and is operated by Miller Sports & Entertainment. After Miller died in 2009, the arena's basketball court has been named the "Larry H. Miller Court at Vivint Smart Home Arena". In 1999, the arena was hit by a tornado, which destroyed the roof, costing $3.757 million to repair.

The Vivint Smart Home Arena is home to the Utah Jazz of NBA and also served as home to Salt Lake Golden Eagles and Utah Grizzlies of IHL, Utah Starzz of WNBA and Utah Blaze of AFL. The arena hosted the 1993 NBA All-Star Game, the 1997 and 1998 NBA Finals, aswell as the 1996 Turner Cup Finals. The arena also hosted the figure skating and short track speed skating events during the 2002 Winter Olympics and hosted the NCAA Division I Men's Basketball Tournament in 2010, 2013, 2017 and 2019.