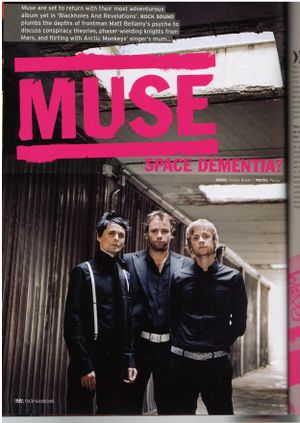 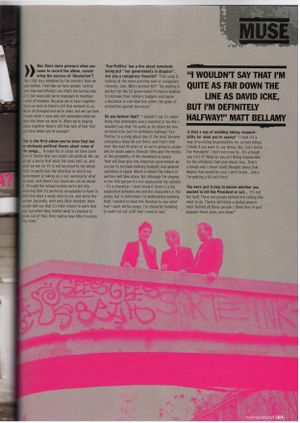 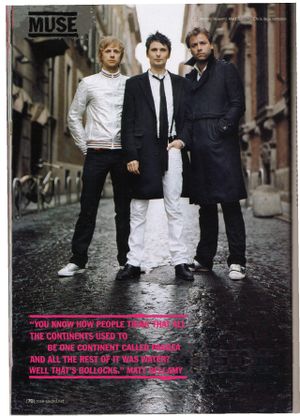 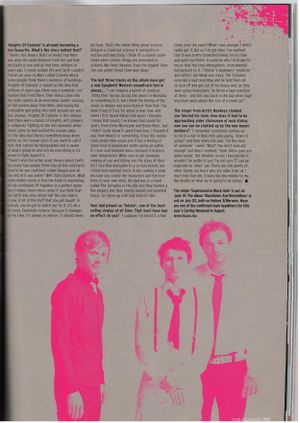 Muse are set to return with their most adventurous album yet in 'Blackholes And Revelations'. Rock Sound plumbs the depths of frontman Matt Bellamy's psyche to discuss conspiracy theories, phaser-wielding knights from Mars, and flirting with Artic Monkeys' singer's mum...

Was there more pressure when you came to record the album, considering the success of 'Absolution'?
No, I felt less inhibited by the industry than we have before. I feel like we have greater control over how everything's run, that's the boring side of it, but musically we've managed to maintain a kind of freedom. Because we've been together since we were 16 there's still that element to us. When we're playing music together, there's still that lack of fear that you have when you're younger.

This is the first album you've done that has an obviously political theme about some of the songs...
A majority of the songs do have some kind of theme that you could call political. We can all get a sense that what the news tells us, and what we see on TV, is not necessarily the whole truth. In particular the direction in which our government is taking us is not necessarily what we want, and there's not much we can do about it. Through the school system, we're led into believing that it's perfectly acceptable to have to work five days a week, nine to six, and serve the system, basically, with very little freedom. Most people will say that it's their choice to work that way, but when they realise what is required to break out of that, they realise how little freedom they have.

Exo-Politics has a line about somebody being just 'our governments in disguise'. Are you a conspiracy theorist?
That song is looking at the more extreme side of conspiracy theories. Like, 'Who's behind 9/11?' The motive is perfect for the US government, if they're looking to increase their military budgets and cause a decrease in civil liberties under the guise of protection against terrorism.

Do you believe that?
I wouldn't say it's something that dominates every moment of my life. I wouldn't say that I'm quite as far down the line as David Icke, but I'm definitely halfway! 'Exo-Politics' is a song about one of the most berserk conspiracy theories out there, and that's that over the next 10 years or so we're going to gradually be made aware, through films and media, of the possibility of life elsewhere in space. That will then give American government an excuse to increase military budgets and general spending in space. Which is where the future of warfare will take place. But although I'm singing in first person, it's no necessairly my opinion - it's a character. I don't know if there's a big seperation between me and the characters in the songs, but in interviews I'm deliberately building that! I wanted to have the freedom to say whatever I want within songs. I'm character-building to really let out stuff that I want to say.

Is that a way of avoiding taking responsibility for what you're saying?
I think it's a way of avoiding responsibility for certain things. I think if you want to say things like, 'Let's shoot the President!' I don't necessarily... it's a tough one, isn't it? What do you do? Being responsible for the influence that your music has... that's a tough one, I never really thought about that. Maybe that would be cool. I don't know... Sorry; I'm getting a bit lost there!

You were just trying to decide whether you wanted to kill the President or not...
It's not his fault. There are people behind him telling him what to do. There's definitely a global government behind all these people. I think they're just puppets, those guys, you know?

Knights of Cydonia is already becoming a live favourite. What's the story behind that?
There's this theory I've head that Mars was once the same distance from the sun that Earth is now, and at that time, millions of years ago, it could sustain life and Earth couldn't. Knights of Cydonia is based on the idea that millions of years ago, there was a complete civilisation that lived there. Then Venus came into the solar system as an enormous comet, sucking all the oceans away from Mars, destroying the civilisation and going into orbit around our sun. But, anyway, Knights of Cydonia is this fantasy that there were a bunch of knights, with phasers or whatever, fighting to the last moments when Venus came by and sucked the oceans away. It's the idea that there's something deep down within us, the human spirit if you want to call it that, that cannot be manipulated and is aware of what's going on and will do everything in its power to fight it. There's this other great theory about Earth. You know how people think that all the continents used to be one continent called Pangea and all the rest of it was water? Well, that's bollocks. What really makes sense is that the Earth is expanding. All the continents fit together in a perfect globe, and it makes much more sense if you think that Earth was once about half the size that it is now. A lot of the stuff you get taught in schools, you've got to watch out for, it's all a bit loose. Especially science because it changes all the time. It's always in motion, it should never be fixed. That's the whole thing about science. Religion is fixed but science is constantly in motion and searching. I think it's a shame sometimes when certain things are presented in schools like fixed theories. Even the biggest theories are under threat from new ideas.

The last three tracks on the album have got a real Spaghetti Western soundtrack feel in places...
I can imagine a bunch of cowboys riding their horses across the desert in Montana, or something to it, but I think the feeling of the music is deeper and more historic than that. I've been living in Italy for about a year now, and when I first heard Italian folk music I thought, 'I know that sound, I've known that sound for years, from Ennio Morricone and those films', but I didn't really know it came from here. I thought it was from Mexico or something. It has this mysterious desert-like sound and it has a feeling of some kind of passionate battle going on within it. I love instrumental music because it inspires your imagination. When you've got someone singing at you and telling you the story of their life I find that enjoyable to a certain extent, but I think instrumental music is like reading a book, because you create the characters and the locations in your own mind. My dad was in a band called The Tornados in the 60s and they backed a few singers, but they mostly played instrumental music, so I grew up with that kind of vibe.

Your dad played on 'Telstar', one of the best selling singles of all time. That must've had an effect on you?
I suppose I've heard it a few times over the years! When I was younger I didn't really get it. But as I've got older I've realised that it was pretty foward-thinking for its time, and quite out-there. The could be why I'm drawn to music that has that atmospheric, instrumental background to it. (Telstar's legendary producer and writer) Joe Meek was crazy. The Tornados once did a bad recording and he told them all to fuck off and get out of his house and, as they were going downstairs, he threw a tape machine at them - and this was back in the day when tape machines were about the size of a small car!

The singe from Arctic Monkeys claimed you fancied his mum. How does it feel to be approaching older statesman of rock status, now you can be chatted up by new bands' mothers?
I remember somebody coming up to me in a bar in New York and saying 'How's it going?' and then she when she said 'I'm the mum of someone,' I went 'What? You don't look old enough,' and then I realised 'Yeah, these guys are quite young,' But whether or not I fancied her it wouldn't be polite to say! I'm not sure 27 can be regarded as 'elder' yet! there are plenty of other bands out there who are older than us. I don't feel that old. It feels like the middle to me, the middle of what we're going to be doing.

The single 'Supermassive Black Hole' is out on June 19. The album 'Blackholes And Revelations' is out on July 03, on Both Helium 3/Warners. Muse are one of the confirmed main headliners for this year's Carling Weekend in August.
www.muse.mu

Go back to Rock Sound UK