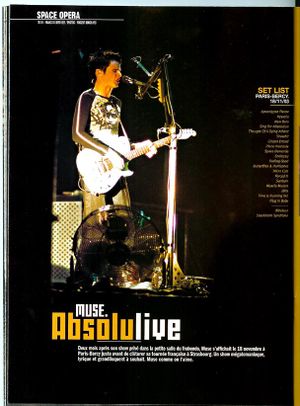 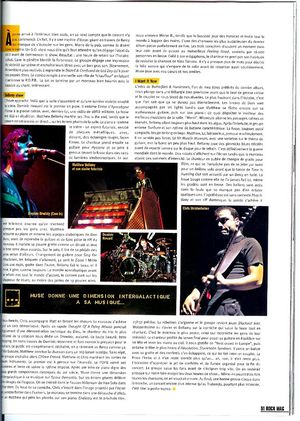 A review of the 18th November 2003 concert at the Paris Palais Omnisports de Paris-Bercy in the French magazine ' Rock Mag'.

Two months after their private show in a little room at Trabendo's, Muse came to Paris-Bercy on the 18th November before closing their French tour at Strasbourg. A megalomaniac, lyrical, grandiloquent show at will. Muse as we love them.

Just arrived in, well seated, we realise the concert hasn't started yet. In fact, there's a kind of enormous screen the wrong way over Bercy who looks like crumbling over the people. Fed up with advertising, as they say in the subway, a G.O (gentle organizer) said to us we have to wait until the object was removed, then the show would begin. Result: one hour late on the schedule. Soon, Cave In enters. The group emits an impression of serenity on the stage and thread their songs with a good big sound. Strangely, they look more motivated playing Dazed & Confused by Led Zeppelin than their own songs. The combo fulfill their role as a support band making the P.O.P.B (Palais Ominisports Paris-Bercy) hum. The set ends with a piece where the bassist sang. Interesting.

The time is coming. The room gets darker and a single purple light invades the stage. Dominic Howard is the first on to come in. He starts the intro of Apocalypse Please, behind him, a video of a military parade. The crowd is already in a fever. Matthew Bellamy raps out his “This is the end”, while the concert is broadcast… on the giant screens of the room. The piano has – like the stage – futuristic looks, coated with metallic plates, with, in front of it, red lights, in a K7000 way. Next, the singer takes his guitar for Hysteria and pounces on his knees, in the middle of rays of light. The sound is so enormous that you almost don't hear the people shouting. Matthew goes back to piano and begins the diabolical arpeggios of New Born, before picking up again his guitar and blow up the riff. On this solo, he drags out from his pedal sounds coming from outer space. Changing guitar for Sing for Absolution, the lighters are on, Zippo is in the air! Micro in one hand, scratches with the other one, Bellamy shows off, and he handles it, as always. The apocalyptical rising before the chorus makes the crowd agree, the concert starts hitting the road, at least the 19 inches legs then. Eyes closed, Chris Wolstenholme backs Matt making the chorus. The song finishes with a demoniac solo. After a fast Thoughts of a Dying Atheist equally punctuated with a technical display from this God, the singer of the trio, the craziest of the creation, dedicates us a Showbiz, acclaimed, absolutely beautiful. Dom's drums clash and make the pressure grow for the chorus. The audience is completely excited; we've rarely seen Bercy this way. Headlong, Matthew punctuates the song. Without a break, the band moves on to Citizen Erased. Matthew and Chris hammer the chords of their instruments. The first one is on his knees in the hangout of the stage. The POPB tries to follow the imposed rhythm. After a piano intro worthy of the greatest composers of the 20th century, Muse gives an intergalactic dimension to their music with Space Dementia. Pictures from outer space unfold on the screens. You could believe you're in Hans Solo's Millennium Falcon in Star Wars. From his cornice, Chris seems to be in the pictures projected in the screens, and looks like floating in the universe. The song ends with Matthew's debauchery, who goes mad with the piano. Endlessly is the next one, announced by Mister B., while the bassist plays maracas and invites everyone to clap their hands. One of the most audacious songs from the new album fits perfectly in live. The three partners talk a little bit in a corner before starting the marvellous Feeling Good supported by 16 000 people. Stick to his micro, the singer doesn't loose the habit of revisiting Nina Simone's song. There's no words left to describe the sonorous madness that takes over the room before falling again so suddenly. Muse plays with our hearts and our ears.

I Want It Now

Butterflies & Hurricanes' intro, one of my favourite songs from the last album, sinks us in a temporary lethargy till the beat and the chorus drags us out from our daydreams. The most frustrating of it is that we know it won't last forever. Dom's breaks are accompanied with lights while Matthew becomes angry on his unfortunate guitar, and then with his piano: and that could have disgusted the best of the musicians in the room. “Merci” (Thank you). Micro Cuts alternates calm moments and some others on the edge, Bellamy going always into higher notes. After the interludes, the band starts Sunburn and its characteristic percussion. The crowd, always so dense, can't stop moving. Matthew is doing his thing, almost mechanically. He doesn't look in a rush. Then, Muscle Museum hit, with an added variation on the guitar's keynote, raises de bar a little bit higher. Bellamy plays staggered blues' gimmicks before playing like in the CD for the chorus. There's definitely a World War in the globe. There are robots in the screens while the song reaches its top intensity. The singer forgets to switch to another guitar for Bliss, but that doesn't stops him from throwing himself to the floor for an umpteenth solo before Time Is Running Out's bass is welcomed by a Bercy in a fury. The people move like we've never seen here, even the bleachers are jubilant. Balloons are thrown to the crowd, which bursts some of them. The high point is without a doubt Plug In Baby and its dantean riff. The performance ends precisely at 23:37. A rebellion is organised and the group comes back to play Blackout with Wolstenholme playing the keyboard and Bellamy on the cornice greeting everyone while he is singing. It's the most peaceful song, the one that brings people closer to their neighbours. The singer uses the final Larsen effect to put his guitar on his head and raising his hands to the sky. He says to us to be the “Best crowd in Europe”, and then he begins the heaviest song in Absolution, Stockholm Syndrome. He bursts a balloon with his guitar and confetti is spilled out which makes him miss a verse. The crowd emulates him and soon there's only one balloon left… oh, no, there's not one left. And this gives the chance to appreciate the confetti and the blast of smoke organised at the end of the concert. The band says goodbye to the fans before they slip away too early. We'd staid much more time despite that the show lasted for nearly two hours. Even if they played thrice the same songs, we'd like more of it. At the end, a good slap in the face, a concert even more intense than at the Trabendo, although it was more diarist, which means a great performance.

Go back to Rock Mag