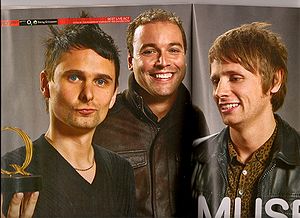 I'd say pushing eight. When we woke up hung over in Serbia this morning, it was about minus 5. But getting back to London pushed it up a few points and then winning this award pushed it up further again. By the time we get to the party later we'll hopefully have pushed it to 11.

This is the 3rd time you've picked up the Best Live Act Award. Not getting bored of it yet, are you?

No, it's nice that we've bagged this again. We're not getting bored of playing live and we're not bored of people liking our performances either.

Your plane from Belgrade landed about an hour ago. you didn't get a nice early night in preparation for today, then?

Does visiting new cities give you more licence to misbehave?

Yeah, a bit. We've been lucky this year in that we've been able to go to new places - Eastern Europe, Asia, Mexico. Sometimes on tour you just cocoon yourself in your hotel room and keep your head down until gig time. being somewhere new puts you in the mood to get out more and meet new people, just to find new experiences.

So what's the oddest experience on tour this year?

Sorry, I can't get the transsexual out of my head now. Indonesia was interesting, mainly because I could've got killed. We'd taken a few silly things and we decided to check out some local bars in a really rough part of town. The houses were all corrugated iron and we had chickens running over the bonnet of the car, people banging on our windows. One of the guys got out of our car and he got shouted at, so we got out of there as fast as possible. But we were told later that we were lucky we didn't get shot, then robbed.

Our tour manager got robbed by three ladyboys in a lift there, too.

Have you had any celebrity fans coming to the shows?

In LA the kid for The Sixth Sense (Hayley Joe Osment) came to see us. I think he crashed his car on the way home.

Paris Hilton to the LA show, too. But she left during Knights of Cydonia, which is the first song on the set. If we're offending Paris Hilton we must be doing something right.

The UK people will see your two Wembley Stadium shows in the summer as the pinnacle of the Muse live experience. How were those shows for you?

I think we did our best. It's an amazing venue and the crowds made those shows. Big shows like that aren't just about the band, its about the whole experience and watching the crowd is part of the fun. It definitely gave us a taste for more of those big shows.

Any outrageous stage props that got vetoed by the council? Ten-foot-high robots and the like?

We wanted to arrive by Zeppelins and drop down to the stage, but we weren't allowed to do that either...

We're gonna make that happen next time. You can get these business Zeppelins now, like a private jet, so we could fly from gig to gig, descend for the gig and then get lifted back into the Zeppelin lounge.

So how do you go about topping Wembley?

We'll probably start from scratch again and build things back up with smaller gigs.

Yeah, more small people. Like Spinal Tap. No, it'd just be good to have the time to evolve the whole musical side of the show.

Is this tour ever going to end?

Technically, it's over in December. But there are a few more things that we've been offered for next year, so who knows?

The rumour is that you're going to headline Glastonbury again next year...

Ooh, that's a strong question! Very strong. Well, Glastonbury is a festival that's very close to our hearts. And it'll be amazing to play it again...sometime. But next year's plans have yet to be settled upon.

No, don't take it as anything.

Back to today: is there anyone here you really want to meet?

I'd love to say hello to Paul McCartney. But so would everyone here, I bet. We'll not be allowed near him.

Are you pretty sociable when you're at parties with out musicians?

It's like when two dogs meet in the park: they eye each other up for a bit, then have a sniff around each other. So we'll see who's smelling OK later. Who's that? (Points at Damon Albarn posing for Q's photographer) Damon Albarn? (Unimpressed) Oh...

What do you want for pudding?

What's the obsession with pudding here? Someone else just asked us that.

So what are you doing next?

I have a meeting with out lawyers. Very rock'n'roll. But we'll be out at the party later. These days if we're in London it usually means we have to work, so one of the ideas in coming to this was to have a big night out.