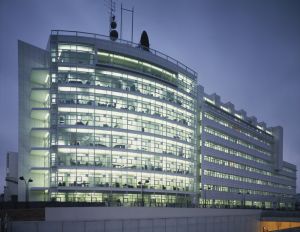 Studios Rive Gauche (translated to Left Bank Studios) are a studio complex, located, as the name implies, on the left bank of the river Seine near Parc André Citroën, in the west of central Paris in France. The studios are owned by AMP Visual TV, a French production company. The building was designed by American architect Richard Meier and was built in 1991.

Upon opening, the building was the heardquarters of Canal Plus, a French television channel. When the headquarters of Canal Plus moved to Issy-les-Moulineaux, a Parisian suburb, the building became a production house and renamed to Studios Rive Gauche. The studios are used by Frenc TV channels such as Arte, France 5 and more. The studios used to be, the filming site of Le Grand Journal, a French music TV show, aired on Canal Plus, where Muse performed several times. The show was filmed in the building until 2015, when it moved to the city of Boulogne-Billancourt in the Canal Factory studio facility. They are currently used to film Quotidien, a similar music show, which Muse also performed at, airing on the TMC TV Channel.