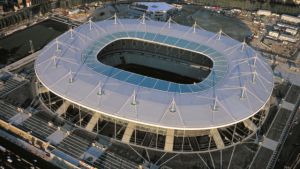 Preparations for the SDF Muse gigs in 2019

Stade de France (English: Stadium of France), sometimes abbreviated to SDF, is the national stadium of France, located in Paris, in the commune of Saint-Denis. It is the eighth largest stadium for football events in Europe with the capacity of 80,698 and is the largest in Europe for track and field events with just over 78,300 seats available. The stadium opened in 1998, as it was originally built for the 1998 FIFA World Cup, and was designed by architects Michel Macary, Aymeric Zublena, Michel Regembal and Claude Constantini. It's owned and operated by the Stade de France consortium. This was the first French stadium in 70 years, after the construction of the Stade Olympique Yves-du-Manoir, to be built for a specific event.

In 2015, the stadium was one of the targets of the Paris bombing attacks with two explosions occuring outside the stadium during a friendly match between France and Germany, with French President François Hollande in attendance. The terrorist was unable to enter the stadium and was scared away by the security, forcing him to detonate outside. The authorities were aware of what happened but chose to keep the people inside, where it was safest, letting the match continue.

The stadium features movable stands which can be retracted to uncover the athletics track. The shape of the roof of the stadium symbolizes the universality of French sport. The tinted glass filters out infrared radiation while allowing blue and green lights to escape through due to it's necessity in keeping the turf healthy. The pitch of the stadium was built without heating as the stadium was built on the premises of an old gasworks and there were concerns it would cause an explosion.

The stadium is primarily used by the France national football team and French rugby union team for international competition. It is also second home to Parisian rugby clubs Stade Français and Racing Métro 92. Some of the major events hosted in the stadium apart from the '98 World Cup include the 2003 FIFA Confederations Cup matches, the 2007 Rugby World Cup matches and the UEFA Euro 2016 matches. All times, it hosted the cups' finals. The stadium also hosted the 2004, 2005 and 2006 Race of Champions auto races. In 2003, it hosted the World Championships in Athletics and between years 1999 and 2016 it paid host to the annual Meeting Areva athletics meet. The stadium is set to host opening and closing ceremonies and athletics events for the 2024 Summer Olympics and will also host the 2023 Rugby World Cup. Music artists who performed at the stadium include Johnny Hallyday, Paul McCartney, Tina Turner, U2, AC/DC, Rihanna, Justin Timberlake, Eminem, Metallica, Depeche Mode, André Rieu and more.