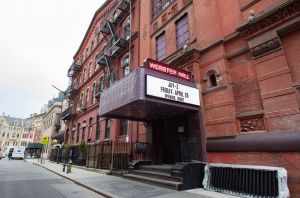 Entrance of the Webster Hall 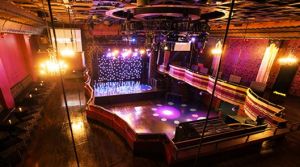 'Webster Hall (formerly known as The Ritz) is a concert venue & nightclub, located in the East Village of Manhattan, New York City. It's one of NYC's most historically significant event halls since it's construction in 1886 as a "club for hire". The Webster Hall consists of three rooms; Grand Ballroom (capacity of 1,500), Marlin Room (capacity of 600) and the Studio (capacity of 400). The venue is owned by Unity Gallega and leased by the Brooklyn Sports Entertainment of AEG.

It was built by architect Charles Rentz and originally comissioned by Charles Goldstein. The first decade saw it host labor union rallies, weddings, meetings, lectures, dances, concerts, fundraisers and other events, mainly focused on the working-class and immigrant population of the East Side. It was known for being a gathering place for leftist, socialist, anarchist and labor union activity early on. During the early 20th century, it became known for its masquerade balls and other soirees by the city's Bohemians. Throughout the first half of the 20th century, the hall also suffered many fires, which occured in 1902, 1911, 1930, 1938 and 1949.

Starting in the 1950s, Webster Hall began featuring concerts by a more diverse group of artists such as Ray Charles, Elvis Presley, Frank Sinatra and Tony Bennett. In 1970, the current owner, Unity Gallega, purchased the site. In 1980, Jerry Brandt opened "The Ritz", in the Webster Hall building as a showcase venue for emerging rock acts, featuring performances by Prince, Tina Turner, Eric Clapton, U2, B.B. King and more. In 1989. The Ritz relocated with the building being restored by the Ballinger brothers from Toronto, featuring state-of-the-art audio, video and lighting technology. The venue hosted two to three genres of music at once with raves taking place in the larger room and rock taking place in the upstairs billiard area. Ever since then, it has hosted concerts by several artists such as Charli XCX, Tove Lo, Infected Mushroom, Modest Mouse, Madonna, Mick Jagger, Faith No More, Metallica, Green Day, Tiesto, The Hives, Disclosure and more. In 1993, the opening scene to "To Wong Foo, Thanks for Everything! Julie Newmar" was filmed at the venue. Linkin Park filmed their Minutes to Midnight Promo Concert at the venue.

In 2016, the venue won Pollstar's Nightclub Of The Year award. In 2017, Brooklyn Sports Entertainment purchased the venue. It closed in the same year to update the infrastructure to modern use. It re-opened in 2019, with a concert by Jay-Z.