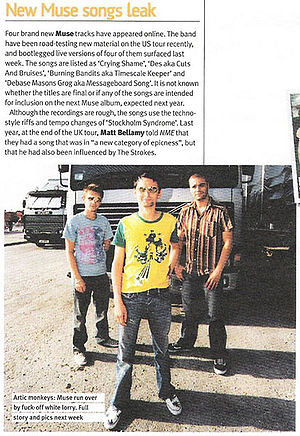 Four brand new Muse tracks have appeared online. The band have been road-testing new material on the US tour recently, and bootlegged live versions of four of them surfaced last week. The songs are listed as 'Crying Shame', 'Des aka Cuts and Bruises', 'Burning Bandits aka Timescale Keeper' and 'Debase Mansons Grog aka Messageboard Song'. It is not known whether the titles are final or if any of the songs are intended for inclusion on the next Muse album, expected next year.

Although the recordings are rough, the songs use the techno-style riffs and tempo changes of 'Stockholm Syndrome'. Last year, at the end of the UK tour, Matt Bellamy told NME that they had a song that was in a 'new category of epicness', but that he had also been influenced by The Strokes.