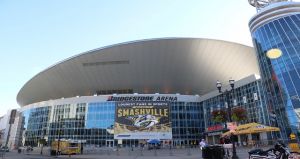 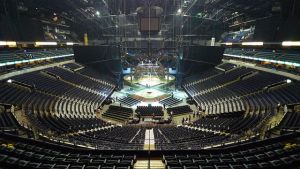 Bridgestone Arena (formerly Nashville Arena, Gaylord Entertainment Center and Sommet Center) is an indoor multl-purpose arena, located in Nashville, Tennessee. The arena opened in 1996 and was designed in association with HOK Sport and Hart Freeland Roberts Inc. architectural companies. In 2007, the arena underwent renovations in terms of concession stands and public areas aswell as infrastructural changes, including a replacement of the scoreboard, which was replaced again in 2019. The 2011 renovations included an installation of the new ice and dasherboard system. In 2015 through 2016, the arena's seating was replaced. The capacity of the arena ranges between 5,145 and 20,000, depending on the event. It's operated by the Powers Management Company and owned by the Sports Authority of Nashville. In 2017, the it was named loudest arena in sports.

Bridgestone Arena is home to the Nashville Predators of NHL and is former home to Nashville Kats of AFL. Some of the sporting events that took place at the arena include the 2016 NHL All-Star Game, the 1997 United States Figure Skating Championships, the 2004 USA Gymnastics National Championships aswell as a few NCAA games including the 2014 NCAA Women's Final Four, and a few games of the NCAA Basketball Tournament. The arena is currently set as one of the primary venues for the SEC Men's Basketball Tournament after an agreement between SEC and Nashville Sports Council in 2013. The Bridgestone Arena also hosted the 2017 Stanley Cup Finals. Musical acts who performed at the arena include Mumford & Sons, Green Day, The Rolling Stones, Metallica, Nine Inch Nails, Tool, Ariana Grande, John Mayer and more. Other events that took place at the arena include the Marvel Universe Live, Jurassic World Live and Sesame Street Live shows, the CMT Music Awards between 2000 and 2005, 2009 and 2016 and since 2018 and the CMA Awards since 2006.