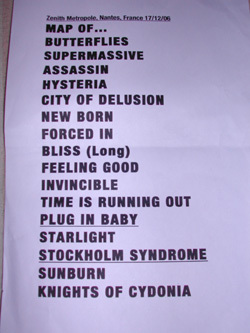 Two songs that were on the official set list, Assassin and Sunburn, were not played.[3] Balloons were released during Bliss.[4] There is no trumpet part in City of Delusion, instead of the trumpet part, Bellamy replaced it with his guitar riff, the video of City of Delusion including Bellamy's riff can be seen here.

After Bliss, Howard asked to the crowd to explode the balloons before they play the next song. Before Starlight, Howard said: "Merci Nantes", then Bellamy said: "C'est fantastique de revenir. This song is called Starlight". After Knights of Cydonia, Bellamy said "Merci beaucoup, nous aimons la France! Merci!" ("Thanks a lot, we love France! Thanks!").

An amateur video recording of the whole show was made, and is available on Dimeadozen,[5] and also here in avi format, encoded with x264.[5]