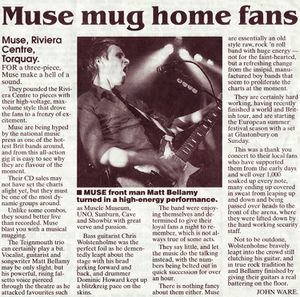 For a three-piece, Muse make a hell of a sound.

They pounded the Riviera Centre to pieces with their high voltage, max-volume style that drove the fans to a frenzy of excitement.

Muse are being hyped by the national music press as one of the hottest Brit bands around, and from this all-action gig it is easy to see why they are flavour of the moment.

Their CD sales may not have set the charts alight yet, but they must be one of the most dynamic groups around.

Unlike some combos, they sound better live than recorded. Muse blast you with a musical mugging.

The Teignmouth trio can certainly play a bit. Vocalist, guitarist and songwriter Matt Bellamy may be only slight, but his powerful, rising falsetto voice pierced through the theatre as he attacked favourites such as Muscle Museum, UNO, Sunburn, Cave and Showbiz with great verve and passion.

Bass guitarist Chris Wolstenholme was the perfect foil as he dementedly leapt about the stage with his head jerking forward and back, and drummer Dominic Howard kept up a blitzkrieg pace on the skins.

The band were enjoying themselves and determined to give their loyal fans a night to remember, which is not always true of some acts.

They say little, and let the music do the talking instead, with the numbers being belted out in quick succession for over an hour.

There is nothing fancy about them either. Muse are essentially an old style raw, rock n’ roll band with huge energy – not for the faint hearted, but a refreshing change from the insipid, manufactured boy bands that seem to proliferate the charts at the moment.

They are certainly hard working, having recently finished a world and British tour, and are starting the European summer festival season with a set at Glastonbury on Sunday.

This was a thank you concert to their local fans who have supported them from the early ays and well over 1,000 soaked up every note, many ending up covered in sweat from leaping up and down and being passed over heads to the front of the arena, where they were lifted down by the hard working security staff.

Not to be outdone, Wolstenholme bravely leapt into the crowd still clutching his guitar, and in true rock tradition he and Bellamy finished by giving their guitars a real battering on the floor.