Uhm... yeah, comment here if you have any feedback on the new theme, there's probably loads of bugs too so point them here for now

It would be nice if we could switch between both and white and black. I preferred the white to be honest. --Alex

The RSS feed. Is there anyway we can compensate for them changing what comes through, because the large amount of black text on the background does not look good wherewas the headlines were fine. Picture description are still hard to read as they are light grey on white background. I would fix this myself but don't know how. The "Singles:" text in Discoboxes is black, I guess that's quick to fix in the css though. Niall 17:16, 15 July 2009 (BST)

I've actually made most td and body text grey as default, chances are there's some rogue inline styling on the thing that's causing it to be different, i fixed the rss one and will be trying to make those images float to the right, won't be loooong :) --crazybobbles 21:19, 15 July 2009 (BST)

Something's not right with the white bars behind the album titles on the Tablature page. I actually kinda like them, but I don't think they're meant to be there. -frozenjakalope 21:35, 15 July 2009 (BST)

Is there something we can do about the black background around image thumbnails? 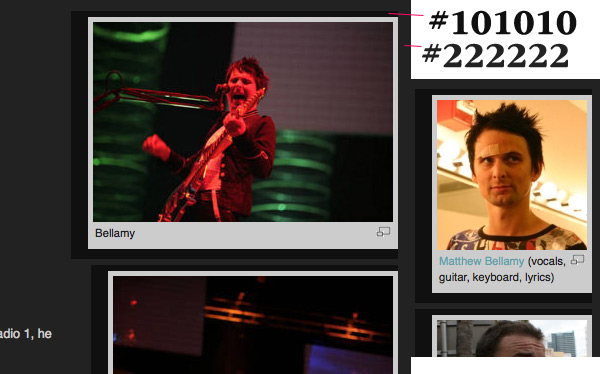 Hope the image is clear enough. basically there is a black box around the light grey box that looks ugly. also the link colour clashes with the light grey a bit although that's only a minor qualm       Wilf  Talk 14:10, 29 July 2009 (BST)

Fixed. Would be better not to define the border for .tright, but I can't find it in MediaWiki:Monobook.css or MediaWiki:Common.css. May have fixed the front page for Opera, too.... btw, you might want a template for that massive sig. :P --Tene 15:52, 29 July 2009 (BST)

Hope I am doing this right... errors I have found so far are when using the search bar most of the first letter is missing, and on the create a user page the font color is grey on a white background- although I suspect this could easily be fixed by using a seperate class, and the search bar issue resolved by changing the padding and margin round it if its possible?

the colours seem to have gotten messed up on the muse member boxes too. i swear it worked before so i think you broke it when you were messing about with the code Tene :)       Wilf  Talk 21:02, 4 August 2009 (BST)

Another thing. In Safari the Redbox and Bluebox templates look like this -

I like the idea of using the webkit gradient-ness but currently the gadient makes it look a bit strange and illegible in places. The front page looks sweet in safari though :) --       Wilf  Talk 21:40, 4 August 2009 (BST)

home page under the picture, doms name is missing, this needs fixing :)

Link colour in the grey boxes