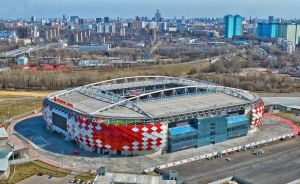 Otkrytie Arena (Eng: Discovery Arena, also known as Spartak Stadium) is a multi-purpose stadium, located in Moscow, Russia. The stadium opened in 2014 and was designed by architectural companies BiznesTehProekt and PozhEvroStroi. It's capacity is 45,360. The construction was delayed since 2007 for different reasons. In 2010, the stadium project underwent a revision by an architectural council.

Otkrytie Arena is the home ground of FC Spartak Moscow and the Russian National Football Team. In 2017, the stadium hosted the FIFA Confederations Cup. It hosted four matches; Cameroon vs. Chile, Russia vs. Portugal, Chile vs. Australia and Portugal vs. Mexico. The stadium also hosted the 2018 FIFA World Cup with five matches taking place at the stadium; Argentina vs. Iceland, Poland vs. Senegal, Belgium vs. Tunisia, Serbia vs. Brazil and Colombia vs. England. The stadium also hosted many concerts by artists such as Rammstein, Ed Sheeran and Green Day. In 2015 and 2016, it also hosted the annual Park Live festival.