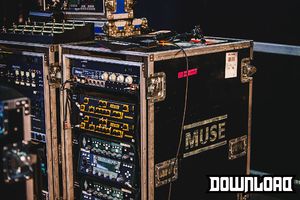 The Markbass SD 1200 is a now-discontinued bass amplifier head, produced by Italian bass amplication manufacturer, Markbass. The SD 1200 is the bigger brother to Markbass's popular SD 800 head, but with more headroom. It has, as its name suggests, 1200 Watts of power and is thus suited for larger stages. Both amps share the same control features. It has a solid-state preamp and a 4-band EQ with two bands of semi-parametric mids.

Chris has been using the Markbass SD 1200 head as his clean amp ever since The 2nd Law era. It has replaced one of his Marshall DBS 7400s, which previously served as a clean amp. Chris has two of them in his setup, one of them serving as a backup.