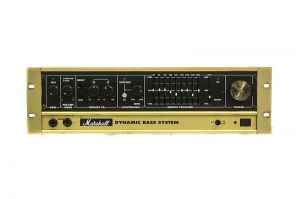 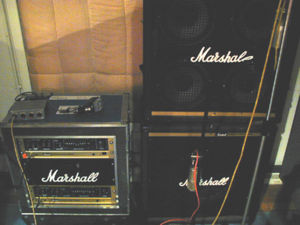 The Marshall DBS 7400 (Dynamic Bass System 7400), is a discontinued 400W RMS bass guitar amplifier head. The heads were being produced for about five years in the 90s before being discontinued and were made in both standard/boxed and rack versions. The amps are capable of driving loads down to 2 ohms, which means any possible combination of bass cabs could be attached to them. According to DBS 7400 users, the amps were also really heavy (which is probably one of the reasons why Chris threw them out of his live rig).

Chris used two of these amps live ever since Showbiz all the way through to the end of The Resistance tour, where he ended up using four. In 2012, he switched to Markbass and Kemper ampliers for his live rig. Marshalls have also been used by Chris in the studio since Showbiz, with the exception of Simulation Theory. In the studio, the DBS 7400's are used as two distortion amps (one for Big Muff and another for Animato) and an Ampeg SVT-VR is handling the clean signal. The sound of the amplifiers is regarded as one of Chris's staple sounds.

In the studio, he usually runs two of them at once, providing signals for his two distinct distortion signals. They run in parallel with the Ampeg SVT-VR, which usually provides the clean end. This setup, however, varies from time to time, depending on the song.