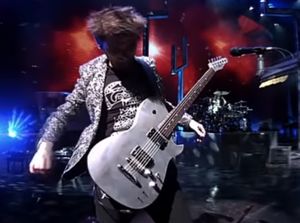 This guitar is one of a handful of Prototypes for the first batch of 25 Manson DL-1 Matthew Bellamy Signature Guitars built by Manson Guitars, first released in August 2011. This one differs by having a push button kill switch and a Fernandes Sustainer instead of a P90 Neck Pickup. This guitar also has a Manson MBK-3 pickup, the first of Matt's guitars to have one fitted.

The DL-1 Delorean got it's first outing at Leeds Festival on 26th August 2011, where it was thrown into the air by Bellamy at the end of both Space Dementia and Stockholm Syndrome, landing on top of Dom's drum kit during the latter. It made a return for the Reading Festival, which was only two days later. It was thrown high in the air again at the end of Space Dementia. At the end of Stockholm Syndrome, it was smashed into Dom's bass drum twice and thrown in the air yet again.

After only two concerts, it currently holds the distinction of being thrown into the air at the end of every single live song it was used in.

The guitar was not used live again after these two gigs.