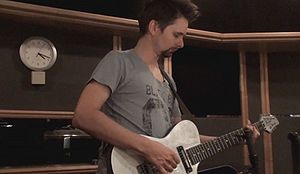 This is a new guitar that appeared on the "Making of" DVD for The 2nd Law, recording Supremacy. Matt wanted a 7 string Mattocaster guitar with an alloy top. During this point, he didn't specify a specific weight so the guitar was built without weight as a consideration (his later guitars used for tours were requested to match a certain weight).

This was one of six Manson guitars created by Hugh Manson for Bellamy in 2012. This guitar has no Kaoss pad controller and does not seem to have any additional electronics, which is a departure from Matt's Resistance-era guitars. It is also the first 7 string that Matt has custom ordered from Manson (the 7 String E guitar was originally not built for him, and the Black 7 String appears to have been delivered afterwards).