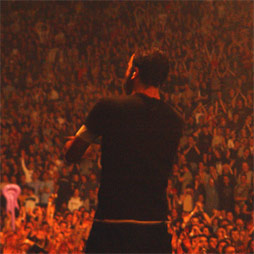 Around the time of this gig, Matthew Bellamy would sing all of the lead chorus vocals for performances of The Small Print himself, unlike later gigs where Christopher Wolstenholme would take over during certain lines. He balanced his guitar on his head after performing Blackout,[source?] as seen at Glastonbury. He omitted the words "scream and she'll shout" from Stockholm Syndrome,[source?] instead opting to step away from the microphone and pop an on-stage balloon with his guitar.[source?]

After returning to the stage for the encore, Bellamy responded to an unusually loud shout from one audience member with "Easy tiger!" followed by some indecipherable gibberish involving the word "fucking".

Bellamy introduced the song Blackout, "Cheers! Cheers... we'll play a new song, if you haven't heard this song yet... this song is called 'Blackout', and Chris is gonna play the keys... It's one for the lighters I think...".

An mp3 bootleg is available in the 'Media Downloads' section of Muselive.com