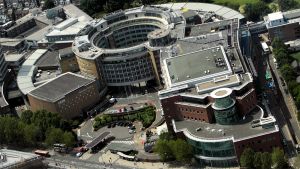 The BBC Television Centre (TVC) was a studio complex in White City, West London. The studios within are used to record BBC television programmes. The building served as the headquarters for the British Broadcasting Company (BBC) between 1960 and 2013 and also housed studios within the building. It was built in 1949 and was at that time the largest television centre in the world, turning out to be twice the size of the original plans.

In 2010, BBC announced that it would disban broadcasting from the Television Centre in 2013. The property has been sold to developers Stanhope plc in 2012. The refurbished building, housing entertainment and leisure facilities and approximately a 1000 new homes reopened in 2017.

The studios, now owned by BBC Studioworks, are still used film shows from various different programmes, including The Johnatan Ross Show, The Russell Howard Hour, It Takes Two and Pointless. The building is also home to ITV's daytime programmes such as Good Morning Britain and Lorraine.