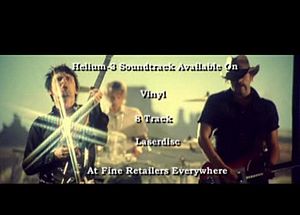 The video for Knights of Cydonia was made available for viewing by the public, initially with a country check on MySpace that made sure the IP of the user was in the USA, on July 11th 2006.

A sex scene was edited out before being aired on television, and the directors cut version is available on Kahn's web site.

The same video is to be used with the UK release.[1] 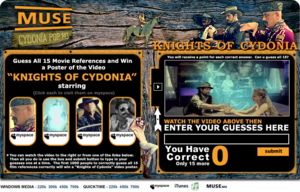 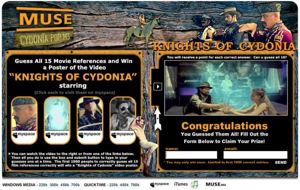 On the 16th September 2006, Muse updated their MySpace profile with a competition on the promotional web site. The aim of the competition was to spot 15 movie references in the video in order to win one of 1,000 Knights of Cydonia movie posters. Aside from the very few obvious ones, such as Star Wars (which is referenced by a robot in the movies' stiff gait and the holograms of Muse being projected everywhere) and Planet of the Apes (which is referenced by the Statue of Liberty petruding from the ground as the 'man with no name' rides past on his horse), most were very cryptic references that were practically impossible to guess. In addition to the competition, profiles were created for the characters who feature in the video as well as the video's fictional director, containing some clues to the answers.

Mysteriously, contest winners were never announced, and no confirmation emails were sent. The competition remains apparently open as off 2010.

Back to Knights of Cydonia