The Ibanez Destroyer is a guitar range that is based around the shape of a Gibson Explorer. The guitar was first introduced in mid 1970s and has been produced ever since. Matt used two Destroyer DTX120 guitars during the course of Origin of Symmetry and Absolution tours, both being part of Matt's on-stage destruction antics, allthough they haven't been used that much. This particular Destroyer model range (DTX120) is known for having a slightly smaller body than a regular Destroyer, thus having the controls layed out in more of a pyramid shape. The DTX120 was produced between 2000 and 2003. 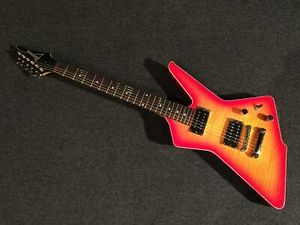 The first DTX120 Matt can be seen using live. It featured a cherry sunburst color scheme and white binding around the body, which was made out of basswood. The neck is maple, while the fretboard is rosewood. Controls are simple, with one tone, one volume and a three-way toggle pickup selector switch. Pickup-wise, Bellamy's Sunburst DTX120 featured stock pickups; an Ibanez Axis 3 neck humbucker and an Ibanez Axis 4 bridge humbucker. Other elements of the guitar were also kept stock.

This Destroyer was used in 2001 for Origin of Symmetry touring, and can be seen in a smash up on the Hullabaloo DVD, recorded in Paris in October 2001.

The guitar was used in 2001 before it was destroyed and succeeded by the black DTX120.

The black Ibanez Destroyer DTX120 was used live by Matt for Absolution tour in 2004.

Matt's guitar included a matte black paint job with white binding. Wood is the same as the cherry sunburst Destroyer, with a Basswood body and maple neck and rosewood fingerboard, as are the controls, with one tone, one volume and a three-way toggle pickup selector switch. Hardware is all-black. The two Kent Armstrong Motherbuckers installed in Matt's guitar replaced the stock Ibanez Axis 3 (neck) and Axis 4 (bridge) stock humbuckers, which Matt kept with his previous Destroyer.

This guitar can be seen in a smash-up during The Small Print at the Earls Court gig in 2004, on the Absolution Tour DVD. Where it was thrown the into the crowd, and it was caught by the man, who was photographed at the Tube station post-gig (see picture in gallery below).

As mentioned above, the guitar was mainly used in 2004 where it was thrown into the crowd and caught by the lucky fan.