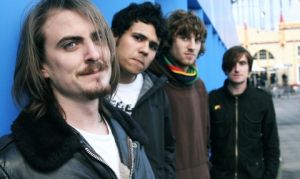 Ground Components were an Australian soul/punk band based in Melbourne, Australia. Formed in 2002, the band consisted of lead vocalist Joe McGuigan, bassist Indira Adams, keyboardist Dallas Paxton and drummer Simon McGuigan. Robert Bravington later joined them on guitar. In 2003, they released their first EP called Ground Components and in 2004, they released another EP called It all Catches up with You / One Step Back. Before releasing their debut album, the band played various shows and rose to fame through live performances, having opened for acts such as The Black Keys, Powderfinger, The Sleepy Jackson, Spiderbait and more, and played festivals such as Splendour in the Grass and SXSW. They have also played Australia's infamous Big Day Out Festival.

Their first and only album was released in 2006 and is called An Eye for a Brow, a Tooth for a Pick.

In 2007, the band toured with Muse as part of the travelling Big Day Out festival in Australia, and were the opening support act for Muse, for their sideshows in the Hordern Pavilion and Festival Hall shows in Sydney and Melbourne.

The band broke up soon after Simon McGuigan left together with Bravington in 2007. The two toured between 2008 and 2010 before starting Thread Count Music Production in 2010. Adams and Paxton played on recordings by artist Dan Kelly and Adams remained in his live backing band. Joe McGuigan performed in his solo project under the name Garage Joe.