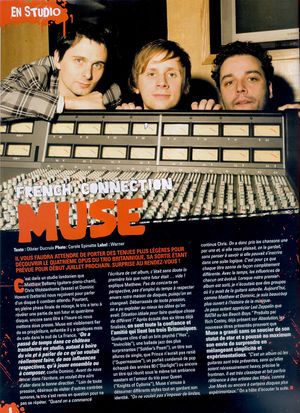 It was in a London studio that Matt Bellamy (singer, guitarist, pianist), Chris Wolstenhome (bass) and Dominic Howard (drums) met with us to discuss the upcoming album. So in the last mixing phase, the trio spoke about their future and 4th album, still unamed or we would’ve revealed it. Muse is obviously proud of their achievement, during a few months in the south of France.

“We spent the time at the castle transformed into a studio, mostly drinking wine and talking about what we really wanted to do, about out respective influences, rather than playing together or writing.”confides Dominic. Before we started writing we wanted to make sure we were going in the right direction. “Far from all the pressure, looking forward to trying out new sounds, the trio take up to do something not done before. “When we started to write this album it was the first time our future was ... blank! “ explains Matthew. “Without upcoming concerts, without deadlines towards the record company, as we were evolving. Free from all pressures we could better exploit the ideas we had. Ideal situation to do something totally different”.

After hearing the six tracks already finished, one feels the confidence and friendship that links the three Britons. Some winks a bit psyche (?) (“Hex”,”Invincible”), a jazz ballad very surprising (“A soldier’s poem”), a title promising of a single, which Prince wouldn’t have rejected {“Supermassive”), a perfect mix of pop escaped from the 80s (“Starlight”), or even a title which gathers at the same time western influence as well as love for the band Queen (“Knights of Cydonia”), Muse enjoys changing styles without loosing their identity.

“We didn’t want to impose limits on us “ continues Chris, “so we took one songs at a time, if we liked it, we kept it, without thinking if it made sense in the sequence. That’s why each title sounds completely different. With time, each one’s influences evolved. After our first album was out, I only listened to bands that had a saturated guitar. Nowadays like Matthew and Dominic, I am very open to the history of music. I can at the same time appreciate Led Zeppelin . RATM or the Beach Boys.” Produced by Rich Costey, already involved with Absolution, the new titles prove that Muse has grown without worrying about their star status and has taken to the maximum their desire to surprise with mixing simplicity with experimentation. “It’s an album where the guitars are very present, without being necessarily heavy,” says the frontman. It’s very classic and sometimes with references to the artists from the 50s, such as Joe Meek or still toward tracks more experimental.” We can’t wait to hear what’s next.

With special thanks to "ocean5" on the official boards for the translation.

Go back to Rock Sound