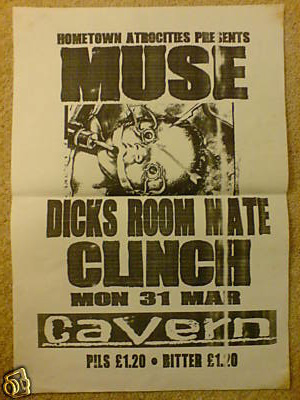 This gig acted as a show-case for Taste Media co-owner Safta Jaffery, arranged by fellow co-owner Dennis Smith.[2] Jaffery encouraged Smith to give Muse free recording time in Sawmills recording studio, from which came multiple demos. Jaffery thought each of these progressively better.[2] The band was then signed to Taste Media, releasing its first UK release, the Muse EP,[3] the following March through Dangerous Records.[2]

A poster from this gig surfaced on eBay on the 30th of January 2009.

This was not the gig where Dennis Smith made his offer. Jaffery would not hear Muse until after the Muse EP had been recorded. The gig happened some time in June of 1997 where Dennis offered Muse free studio time at Sawmills.