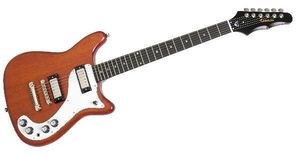 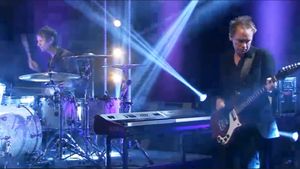 Morgan with the Epiphone Wilshire

The Wilshire fetaures a double cut body and two pickups (either Epiphone's Mini Humbucker pickups or two soapbar P90 pickups) with a Rosewood fretboard. The most known colour scheme it came in was the cherry red body with a white pickguard and a black head.

This guitar was used by Morgan at the start of The 2nd Law tours, and was first used as a rhytm guitar for Madness and later a few more songs, before being replaced by a custom-built Manson Wilshire Guitar, which Manson built for Morgan, and is based around the Epiphone Wilshire. Morgan appeared to have two of these guitars, one being the first generation (on which the Manson is based on), while the second one being one of the later generations, and was only used occasionally.