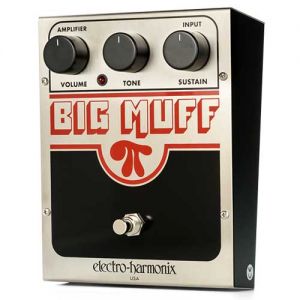 The green and black russian Muffs, used by Chris and the Bass Big Muff used by Matt while on bass duty

The Big Muff Pi, or most commonly known as Big Muff, is one of the most iconic and well-known fuzz pedals around. It is also one of the longest-running pedals with many types and varieties being produced throughout it's existence. It is produced by Electro-Harmonix (EHX), a New York City-based, together with their sister company, Sovtek, from Saratov, Russia. It has a distinct thick-sounding fuzz sound which almost doubles as a distortion pedal, however the tone depends on the model.

As mentioned, there are several models and varieties of the Big Muff, apart from the standard so called NYC Big Muff Pi, that have been or are produced, including the Op-Amp Big Muff Pi, the Metal Muff, the Nano, Little and Deluxe Big Muff Pis, the Bass Big Muff range, Tone Wicker Big Muff, to name a few. During the 90s and through to late 00s, Sovtek also produced a series of Big Muff Pi pedals, nicknamed the "Black russian Muff", the "Green russian Muff" and the "Civil War Muff" with several versions under these three categories. The russian Big Muffs are known for having more mid and low end presence to the tone as opposed to the U.S. muffs, which made them very popular with bassists. Both the civil war and the green russian muffs have been re-issued in smaller, standard-sized, so called "nano" enclosures.

During the Showbiz era, Chris has used the V7 "Bubble Font" Sovtek Green Russian Big Muff Pi, which he replaced during the Origin of Symmetry era with a V8 "Four-Screw" Black Russian Big Muff Pi and currently uses several of them. Ever since Showbiz, the Big Muff, together with the Human Gear Animato, has become part of Chris's core sound and has been used on every album. The black muff is most notably heard on songs such as The Groove, Supremacy, The Small Print and Bliss.

With Chris's three-amp setup, he is using one Muff per amplifier, allowing him more flexibility in terms of both tones and usage.

In 2019, Bellamy has also said to be using the standard NYC Re-issue Big Muff Pi during the recording of Simulation Theory. He has also been seen using the Deluxe Bass Big Muff Pi for the bass work with The Jaded Hearts Club band.

Go back to Bass
Go back to Guitar effects & Amplifiers