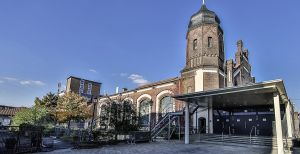 Interior of the venue

E-Werk (or E-Werk Köln) is a concert venue in Köln-Mülheim, Cologne, Germany. The venue used to be a power plant, built in the early 21st century. The power plant provided electricity for the city of Cologne up until 1950s, when it was converted into a wire rope factory. After the factory has been disbanded, the building served as a warehouse until 1984, when the roof sustained damage after a severe storm and the building was even considered for demolition. The building was put into the monument list in 1986.

By the end of the 1980s, members of the German music group BAP decided to set up a new concert location in Cologne, as, at that time, the city did not have sufficent locations for rock concerts with Müngersdorfer Stadion (now RheinEnergieStadion) was too big and other locations were too small. In two years, the building undergone renovations and opened as E-Werk in 1991. Since then, it has been used for various concerts and events.

In 2006, E-Werk undergone the second renovation which increased te capacity to 2,000.

Muse have performed in E-Werk three times so far.