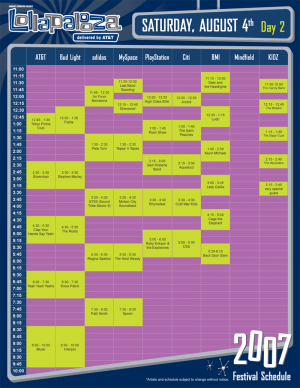 The third annual Lollapalooza, Muse performed at 20:30 central time on the AT&T Stage. Matthew Bellamy ran off stage after nearly every song for almost ten seconds. Technical problems most likely were caused by an unexpected downpour within an hour of their set.[3]

Live premiere of [JFK] which was used as an intro in its extended form.

Bellamy said "This next song is for anyone who remembers our first album" before Sunburn.[4] Howard repeatedly said "You guys are very kind" throughout the show, which sparked the rumor that the band's monitors were not working through the show, meaning they literally played deaf.[4]