MuseWiki, wiki for the band Muse
(Redirected from Callum Taylor)
Jump to navigation Jump to search 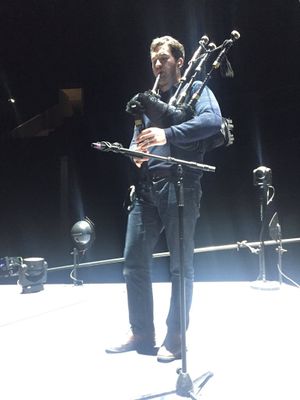 Calum Taylor was born in 1977 and is the 2nd born to Tom Kirk's aunt Catherine and uncle Lorne Taylor. He learnt to start playing pipes age 3 and at a young age used to call them his "octopus in tartan". Calum excelled in school before he was expelled for playing his pipes during class. He has a preference for rugby, volleyball and beer. Calum went to Stirling University and by all accounts studied little. He has a lovely family and tries not to drop his son as much as he does rugby and volley balls. His cousin Tom once said of Calum that "he's an excellent dancer when Tina Turner comes on and is surprisingly polite despite his appearance". His brother Iain Taylor interestingly has the world record for continued Download Festival attendances and is known for a questionable beard and unequalled beer consumption. Calum has a dog and is by all that know him a lovely chap who is always willing to play pipes whenever Muse ask him. In Glasgow, his nickname is #Legend.