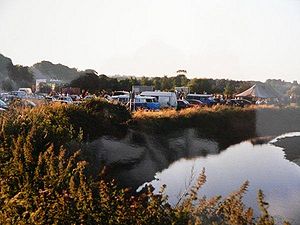 One of Muse's early performances. Their stage time was from 21:30–22:00.[2] Muse were among eight other bands to play at the same time, presumably on different stages within the Budstock site.[2]

One song is known to have been played - Boredom. Some time in 2007, speculation started that this was Spiral Static, but after a sample of the demo tape recording of Boredom was shared on the 8th of December,[3] it was identified as such.[4] Testimony from someone who claimed to have videos of the performance shortly before the Boredom clip was released included three songs - Sober, Nature_1 and an untitled track - as well as an instrumental.[1] Assuming this testimony was genuine, the untitled track probably was Boredom.

A partial video of Boredom was brought to light in October 2005.[1] No other footage of this show has ever surfaced.