An article focusing on the April 2008 Charity concert at the Royal Albert Hall. 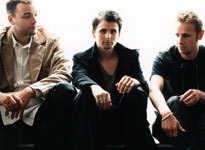 The show appears to be one of only two UK gigs for Muse this year, following their Wembley Stadium shows last June.

"We've been having a break for the last few months," Matt explained, "And I think this year is gonna be very relaxed. We're going to do a couple of gigs here and there, but we're not gonna tour.

"But we are doing a couple of one-offs. For example, we're doing the Albert Hall Teenage Cancer Trust show in April, then we'll do the V Festival and a couple of other sort of 'holiday gigs'."

"We're gonna do Dubai. We actually wanted to go there anyway but we might as well do a gig there to pay for the trip and it's the same with South America. We might go down for a sort of 'half-holiday' and do a couple of gigs because we have never been there before."

The frontman went on to reveal the band's dual ambitions to stage an world stadium tour, and simultaneously experiment with reigning in some of their more grandiose tendencies.

"What inspires us is the idea maybe of doing shows like Wembley Stadium, but trying to bring it to more countries around the world, because we haven't really toured at stadium level.

"That's something we would like to work towards, but at the same time there's a reaction against that coming at us and I'm sure we are gonna start doing a few smaller gigs. Like this Albert Hall thing might be one of them, where we gonna strip things right down and play very simply without any gizmos. Just get back to the basics of music.

"I imagine there'll be those two sides of a band which might sort of evolve. Like the very large scale concerts might still appear, but they're gonna be rare. And we might be throwing in a few of our own side projects."

The prestigious venue for the upcoming charity gig has also inspired Bellamy to attempt something different musically.

"I would like to do a concert with an orchestra in somewhere like Albert Hall," he explains, "I think it would be unfair to ask all the musicians to come in such short notice for April, but it's something I would like to work towards in the future."

The Teenage Cancer Trust concerts - now in their eighth year - were set up by Who frontman Roger Daltrey, to raise money for young adults with cancer, leukaemia, Hodgkin's and related diseases.

The full details of the 2008 Teenage Cancer Trust Charity shows will be announced on 21 February.

Go back to BBC 6 Music