A review of the 5th December 2003 gig at the International Centre, Bournemouth. 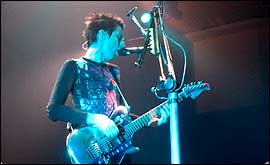 Thousands crammed into Bournemouth International Centre when Muse stopped by on their Absolution Tour.

BBC Southampton's Simon Marks was there.

There wasn't any doubt about the reception Muse received in Bournemouth. The capacity crowd surged forwards and screamed even louder than the band as Matthew Bellamy, Chris Wolstenholme and Dominic Howard stepped out.

For the first few minutes the trio stayed partly hidden behind their metallic stage set. Standing on podiums and lit from behind, we could see only their outlines. 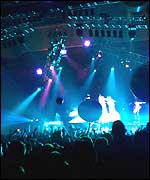 Then, as if to say "ok, it's started", Matthew leapt out from his keyboard "pod", picked up his guitar and paced along the front edge of the stage.

Suddenly the lights came on, three giant video screens dropped from theceiling and Muse launched into 90 minutes of pure entertainment.

Alternating between blistering heavy-rock guitar and euphoric keyboard-driven melodies, Muse are often compared to Coldplay and Radiohead. There is a similarity, true, but Muse stood firm in their own right.

They sounded great - even though the sound system was struggling - and all three performed brilliantly, but the man of the moment was Matthew. Equally at home with keyboard or guitar, his considerable talent is obviously the life blood of the band. 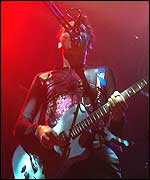 We heard most of the singles, and the crowd bounced about in gratitude to all of them, going particularly mad for Time Is Running Out.

The show was carefully organised to evolve as the songs went by. First we went on a journey through space, then a pair of enormous blowers literally filled the room with confetti.

Towards the end, dozens of giant balloons dropped into the hall, where they crowd surfed until they burst.

I'd gone to the gig with a friend, who's a few years older than me. He went to the first ever Glastonbury and once sat next to Brian May at a Led Zeppelin concert. He thought Muse rocked. Next to us were a group of teenagers, and they thought so too.

Top stuff. Radiohead and Coldplay both at once, still wouldn't be Muse.