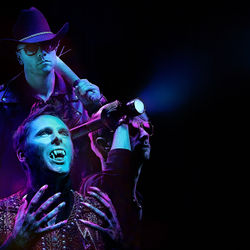 "Something Human" is the title of Muse's latest single which was released July 19th, 2018. Bellamy said that the track is "intimate" and marks departure from the “dark, moody” Drones album.[1] The single's also going to be part of the new album.[2]

Matt said about the song that: “Life on the road can bring out your inner beast, this song and video is about taming that beast, desiring a return to something human".[4]

Matt has also mentioned to Billboard: 'The song comes from when you do get a bit burnt out from being on the road for too long [...] “Something Human” came out, which is a more tender, down-to-earth, simplistic song about what it feels like to be burned out and wanting to get home to a more normal life after being on the road for a couple years.' [5]

The song was written right after the Drones world tour finished, which becomes apparent in the lyrics. The song appears to talk about going home and seeing the loved ones again, after a long time being separated far away.

When Muse recorded the song, the idea was for it to be completely organic, acoustic and folky with no synths, more like this version. Matt posted a short video of him playing the acoustic guitar before the song was released. You can watch the lyric video of this version here.

At the premiere of the Drones World Tour Movie, after the movie, at the post-credits scene, a teaser was played. The teaser was uploaded onto Muse's YouTube channel 5 days later, and can be viewed by clicking on this link

In the teaser, the population number on the traffic sign appears as '213,340,5057'. If you phone this number a bot is going to give you the lyrics for Something Human.

Chris said that when they've first recorded the song, the idea was for it to be completely organic, acoustic and folky with no synths, but as the song developed in the studio, they've added synth elements, leading up to the song sounding half folk, half acoustic but at the same time also pretty electronic. He also mentioned that it showcases a different side to Matt's songwriting, saying that it's different than any newer stuff that they've written for the previous albums.[6]

Something Human is one of the first songs after a long time Matt has written on acoustic guitar. Drum-wise, apart from the constant kick beat, it mainly features lots of percussion elements including handclaps, tribal drums and toms. It also features an acoustic guitar and clean bass. The band have also added in some synth elements, including a vocoder track, and a synthy theremin solo, making the stripped-down folky song sound quite futuristic.

Something Human made the live debut in the Later... with Jools Holland TV show.

My circuits have blown