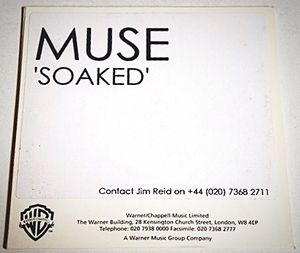 An unreleased song that was first known about in 2007 and first heard from the Warner/Chappell song catalogue in October 2009. Sounds similar to "United States of Eurasia" and "Hoodoo". It is unlikely that it was recorded during the time they recorded The Resistance as Muse have said they only recorded what is on the album, however it may have been completed after The Resistance was finalised. In the song's metadata the date of the song is automatically set to 2006 suggesting that it could be from the Black Holes and Revelations era. Furthermore in the 'Making of The Resistance' documentary, the band reference a song sounding similar to "United States of Eurasia" which never saw public release. Due to the similar sounding string sections of both songs it is "Soaked" the band are most likely referencing, suggesting that it could be the Elton John-like song the band never released.

Matt Bellamy spoke briefly about it in the Japanese magazine Crossbeat.

"I wrote a song called ‘Soaked’ when we were making Black Holes and Revelations, it is just like ‘Nikita’ by Elton John or one of those kind of tunes from the 80s. According to our publisher, it’s an Adam Lambert-esque song, who took second place in American Idol. I want to write various genres of music, classical music, pop music, and anything. I suppose Muse have the clear distinction that we must not go overboard, however, I sometimes cross that threshold as a songwriter. When I’m about to do so, it's made clear thanks to Chris and Dom.”

The song was never officially released to the public by Muse, but this promo CDr (see image)was issued simultaneously with the song being added to Warner/Chappell's online catalog of songs written by Matthew Bellamy in October, 2009.

Metadata on the track indicates the song was recorded in 2006. It is believed the song was mixed and mastered in 2009.

Soaked to the bone

Sink like a stone Walk home alone It's not the first time, it's not the worst crime Your soul will be okay

Soaked to the bone Sink like a stone I will take you home It's not the first time, it's not the worst crime Our souls will be okay