Difference between revisions of "Diezel VH4" 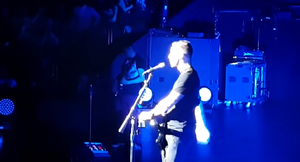 The Diezel amplifiers are a series of German midi-controlled amp heads. Being hand made, these amps are quite difficult to come by.

Matthew Bellamy used to use a Soldano Cabinet with this Diezel VH4 (four channel) head. He's currently using the VH4 in combination with the Mills Acoustic Cab.

The VH4 is also one of Bellamy's favourite high-gain recording amps, often used in combination with a Vox AC30.

The VH4 has 4 different pre-amps which can be adjusted absolutely independently. The sound options and basic characteristics are very various and cover all ranges from superclean to ultragain. Channel 1 and 2 are particularly suitable for gritty funk and/or dynamic clean sounds. With the gain structure of these two channels back-to-the-roots blues and vintage sounds can also be produced. Channel 3 and 4 make a further multiplicity of sound options possible, from heavy metal rhythms to high gain leads. Additionally each channel has a switchable insert loop.

The sound controls are very efficient. The lows and trebles are very balanced and leave enough space for warm and cutting mids. The interaction of pre and output stage guarantees an absolutely clean and dynamic sound impression.

Two Diezel heads were spotted on stage at Glastonbury 2016 (as Matt skips across the stage during the octaves in Psycho). A couple of Diezels were also spotted at the 2018 Royal Albert Hall gig behind Matt's tech.

Go back to amplifiers