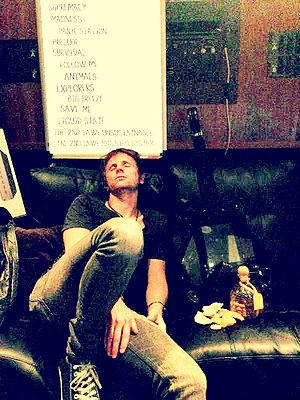 In an NME article, the song was described as 'stadium stomp' and being about the world being in "meltdown."

According to previews of the album, Big Freeze is a surprising song with funk elements while retaining a 'Muse-y' sound. [1]

This name was unknown until the 13th July 2012, the day that Muse tweeted the same picture with Dom and the leaked names, but with the working titles replaced by the new album tracking list. Based on the lyrics and the previous accidentally tweeted titles, the working title for this song can assumed to be 'Hiding to...'.

An alternative version of the song exists that employs synths evoking 8-bit music. The instrumental version hosted on the Warner/Chappell Music catalogue is of this version.

This is the only song left from The 2nd Law that hasn't been played live yet.

Healed? Or are you still just reeling? Are you fine? Have you found a way to escape? Are you here, just because I need you? Can we hole up? A big freeze is heading our way

We are on a hiding to nowhere We still hope, but our dreams are not the same And I, I lost before I started I'm collapsing in stellar clouds of gas

Fight, or will you show me mercy? We've expelled, the goodness from our hearts Are you here, just to prove you’re winning? Can we hole up, and ride out this electrical storm?

We destroyed something beautiful We have faith, but our truths are not the same Don't give up, don’t let the magic leave us Stop the loneliest force becoming king of the universe

Hear me What words just can’t convey Feel me. Don't let the sun in your heart decay

Don't give up, don't let the magic leave us We're collapsing in stellar clouds of gas