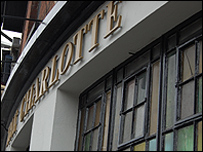 The city saw the end of an era as The Charlotte music venue closed at the end of January. This closure of the iconic venue will disappoint generations of music lovers who have seen some of the best British groups ever at the Charlotte.

The doors are closed and the Charlotte, one of Leicester's favourite music venues, is finished...for now.

Manager Andy Wright ran the place for 23 years...and during that time some of the most famous bands in the country such as Oasis and Coldplay performed on stage there.

"Night after night we saw great bands. Now I'm looking forward to some time to reflect on it all because it was night after night - relentless. "
Andy Wright, former manager, The Charlotte

Andy spoke to BBC Leicester's Bridget Blair about the rise of the bigger venues in other cities affecting trade.

He was shocked by the treatment of the owners and feels bitter. "It was too stressful in the end."

However, Andy maintains that the Charlotte is a perfectly good venue but he recognises the difficulties of getting bands to Leicester: "It's quite hard at the moment because of the financial climate... The overall costs of running the Charlotte don't add up at present." 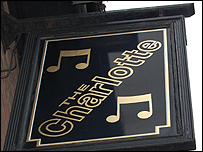 BBC Leicester has been talking to Punch Taverns which owns the Charlotte. They provided a statement saying they are unable to comment on the particular circumstances that have resulted in Mr Wright's business entering into administration.

They add it's not in their interests to see their businesses fail, and that the Charlotte is an important venue to the Leicestershire area and they are committed to its future.

Andy Wright speaks with great affection for the place even though it's been stripped of most of its fittings. he says: "It's always been a bit of a TARDIS... deceptive about how many people can fit in here."

Posters still adorn the walls calling back memories of the venue's glory days.

For example, Cloldlplay [sic] appeared there on 15 June 2000 and Andy paid them £30 petrol money to come up from London to play with some local bands!

Andy says: "Night after night we saw great bands. Now I'm looking forward to some time to reflect on it all because it was night after night - relentless. It was very hard work but very rewarding.

"I'm feeling hopeful for the future. I'm looking forward to spending time with the family. Every dog has his day and I must be positive about the future."

The Charlotte has been one of the main music venues in Leicester for years. 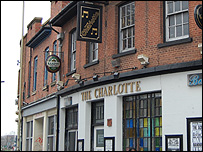 The iconic building has indeed, attracted legendary bands such as Oasis who played there in 1995, and Muse in 1999. These are just two examples of great talent within The Charlotte's walls.

Despite many talented and famous bands still gracing The Charlotte, such as Arctic Monkeys in 2005, it is now struggling to pay its bills.

Larger cities with bigger venues such as Nottingham and Birmingham are taking the glory away from this small, yet deserving Leicester venue.

The Charlotte may not have the technology or the glamour that comes with the likes of Nottingham's Rock City, yet its tiny size is a great advantage.

The one small barrier that separates the crowd from the stage allows the fans a closeness with bands that is just not possible in a larger venue.

Young musicians will also suffer from the closure.

The Charlotte puts on local bands as support for ones that are touring.

It also has an 'All Ages Night' to accommodate performers under the age of 18.

If funds can not be found, then numerous performers will be left struggling to find a place to play in Leicester by the end of the month.

The Charlotte has been host to highly successful bands alongside local musicians for years.

If forced to close, it will be sorely missed by all music lovers and bands who have ever felt the energy and excitement that comes from being in this historical and famous venue.