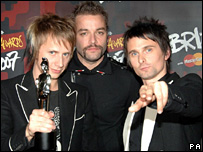 Brit winners Muse have revealed they have been asked to play at a major gig to raise awareness of global warming.

"We've been asked. I think it will happen in seven continents around the world, all on 7 July," drummer Dom Howard told BBC 6 Music.

The concerts, yet to be confirmed, are rumoured to be backed by Al Gore, the former US vice president behind global warming film An Inconvenient Truth.

Frontman Matt Bellamy told BBC 6 Music they had a gig in Ireland booked for the same day as the global warming concert.

"There's an issue... we need to work out if we can make it or not, that's basically what it depends on," he told the radio station.

Howard said there would be "a lot of bands playing".

An official announcement about the concerts is expected in the next few weeks.

Muse's Brit live act award was voted for by BBC Radio 2 listeners - it was the second time they have won the award.

The live favourites, who beat the likes of Robbie Williams and George Michael to the prize, are also playing two nights at the new Wembley Stadium this summer.