My real name is Tom Van Herreweghe. I've been a Muse fan since I heard Plug In Baby on a radio station in April 2000. I tried to find out who the band was, and downloaded some other songs. I was immediately hooked. Soon after, I saw them for the first time at Rock Werchter, and a bit later on Pukkelpop 2001 (Gig). 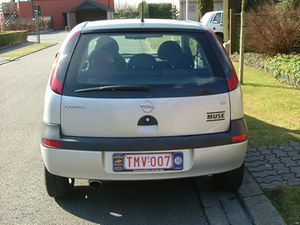 My car, with custom sticker :)

Definately! I am collecting any bootleg of them I can find. I also buy every album & DVD of them, and I even imported some collectibles, like the Absolution LP, and In Your World/Dead Star. Ow, and before I forget, I even had a car sticker made. Check it out on the right, or on a bigger version here

I work as a webmaster for the Belgian government. In my free time, I keep my own websites, like to read, listen to music, go to the cinema, spend time with my girlfriend, ...

Muse gigs I've been too