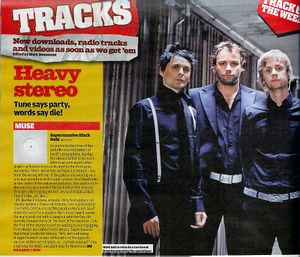 So you've broken free of the globally-warmed tatters of Earth's atmosphere, leaving the sinners below to be burnt alive in an apocalyptic alien death-ray firestorm (co-ordinated by the Pentagon, obviously). Then - Muse-ton, we have a problem! - you hook the wrong left out of the galaxy and wind up on a one-way wormhole to the solar system-sized black hole at the centre of the universe! And man, this mutha sucks like a 10-ton Dyson full of Richard Ashcrofts! Reverse thrusters! We're going in! And, my God! Inside a black hole it's like... it's like...

It's like Beck's house, actually. Dirty funk guitars rub saucily against a Prince-ish falsetto over a pink leather couchette, QOTSA are stuffing Marilyn Manson's head down the lavvy for a laugh in the 'chorus' and it seems the world ends not with a bang but with the Day-Glo Sorority Daiquiri Party At The End Of The Universe. Only the first of the myriad surprises waiting to burst giggling from Muse's incredible fourth album, 'Supermassive Black Hole' posits the theory, "Hey, we're all being dragged toward certain obliteration in the gigantic vacuum at the core of space, so... hot tub anyone?" One small step for Matt, one giant leap for Matt-kind.