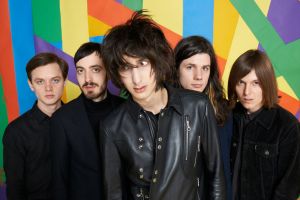 Upon their formation, the band was centred around Junkclub, an underground club founded by Webb and Oliver Abbott. Their first rehearsal consisted of two cover songs. Two years after, the band released their first album and played the NME Awards Indie Rock Tour in early 2007 along with Mumm-Ra, the View and the Automatic, which helped garner further notoriety. Eventually, Strange House reached No. 37 on the UK Albums Chart. Their second album, Primary Colours, was officially released on 4 May 2009 to critical acclaim, and reached No. 25 on the UK Albums Chart. Primary Colours was nominated for the 2009 Mercury Prize. NME later awarded the album first place in the 50 Best Albums of 2009. In 2012, a year after releasing Skying, the band joined Florence and The Machine on the UK and Ireland leg of her Ceremonials Tour in March 2012. In 2014, the band self-produced an album called Luminous and a year later, they already started working on new material with producer Paul Epworth.They supported New Order in November 2015 and played several festivals during that time. After supporting Depeche Mode in 2017, they announced their fifth album called V.

The Horrors supported muse during their first European leg of The Resistance Arena Tour, between October 24th and November 2nd, 2009.