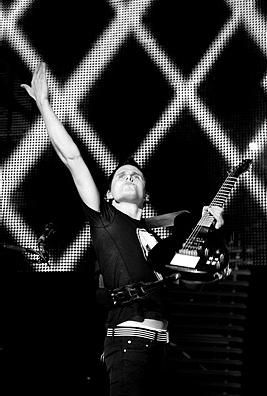 "Soldier's Poem" was on the set list in brackets before "Knights of Cydonia", but was not played. Chris appears to have either missed his cue, or his bass guitar cut on the first strike of "Hysteria".[2]

Muse were originally scheduled to go on stage at 21:00, but they were apparently delayed until 21:30.

"Fury" was played in B flat. Balloons were released during "Bliss", and CO2 shot up in "Butterflies and Hurricanes" and "Knights of Cydonia".

Space Dementia was played in the Soundcheck.

A recording in ~192kbps mp3 format can be obtained here. A separated version of the same recording can be found here. On the 25th December 2007, an official pro-shot video in black and white of Fury from this performance was made available to download from the official site. The video can be obtained here in .flv, .mp4, .wmv and .avi.