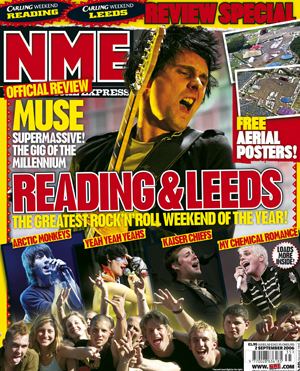 Coverage and review of the Carling Weekend 2006.

It'd be daft to think the question "How does one follow the Arctic Monkeys?" didn't enter the mind of Matt Bellamy tonight's walk to the stage. Yet I'd be foolish to imagine said question took precedent above the thought, "I wonder how loud my guitar will go?" See, from the moment Muse take to the Carling Weekend: Reading Festival stage, unleashing their sci-fi spaghetti eastern single cut 'Knights Of Cydonia' with impact of a nail bomb, their headline slot is an out-and-out exercise in rock 'n' roll bombast.

If there were any nerves en route to the stage, then by the time 'Supermassive Black Hole' roars into view, such concerns are transposed on to the shoulders of those in the Sheffield camp. 'Plug In Baby' sees Bellamy tearing at his guitar like a dog eating meat. He looks orgasmic. It's much the same in the crowd - the biggest surprise of Muse's performance being their evolved ease at uniting daytripping beer boys with calm, considered nerdy factions of the crowd which have always constituted their fanbase. 'Plug In Baby' sees such disparate factions aligned in one communal sing-song, Reading's combined voices riding the fury of Bellamy's guitar like a galleon sailing on magma.

It's a thrilling experience - what happens tonight is less a mere rock show and more an anointment of Muse as a bona fide band of the people. They leave us with the most esoteric string to their bow, the three-part synth odyssey that is 'Take A Bow', and the crowd's knees buckle at their brilliance. The only nerves in the house are those touched by their sheer magnificence.