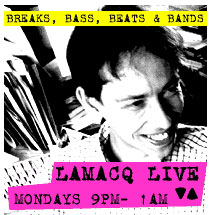 Matt Bellamy appeared on The Lamacq Show answering a few of the fans questions and spoke about the making of Absolution.

"The album was starting from scratch ... it's half best of, and a half future of.."

Absolution title? - "For me the act of making music itself is an absolution, it's a way of finding a meaning of life"

Recording Absolution - "[When Recording] We started with the more orchestrated, over the top, 'we're losing it' kind of stuff, but in the middle, went back to basics doing three piece rocky stuff"

Ideas for the stage show - "I wanted to get an inflatable worm, that you could crawl through that goes around the mosh pit and around the back of the stage and back into the mosh pit, but health and safety might not allow it" ... ".. Come on stage in your paramotor, land on the stage and start?..yeah, but if I crashed, I could maim the whole band!"

Time Is Running Out was then played for the first time.

Matt, Dom and Chris appeared live on the show for a 30 minute feature about the new album.

"We tried to keep the album as a three-piece as much as possible."

Album title? - "I was reading "The Elegant Universe" and "Hyper Space" which contains theories about what the universe is, and it has different perspectives on it .. It had a lot of mathematical concepts in it and I'm not very good with that, but I was trying to grasp them, and the book explained that the next big question is "what is the origin of symmetry". I related this to what I had on a computer screen that had the wave form of the music on screen, and I became interested in the fact that music is completely random vibrations in the air, but we make sense of what is chaotic and make it in to something beautiful. Music has always been an escape for me, and when I play music it is like I don't exist and everything becomes very simple and to me that is the only thing that actually is me. Music is my origin of symmetry and it is rationalising all the chaos."

There are some very big endings! - "Space Dementia has that ending because it was going to be at the end of the album, and if you listen to Space Dementia on loud speakers, you will find it reaches the absolute limit of what is the sub, and what is the height of your ear at the same time. So it hits the absolute extreme of what our hearing range is. We were going increase it to an illegal level, but we didn't. We recorded the ending at a different time, and had the song playing and then we came in as the song finished with a completely different setup with different instruments and it was supposed to be a shock thing, because up until then it was all very piano."

"I've always struggled to find out, whats the point of anything? Do you ever get that?"

"I haggled a vicar from £400 to £350 to play the church organ (for Megalomania) ... and we recorded this song which is extremely anti-christian underneath a statue of jesus, it was quite a dark moment of my life."