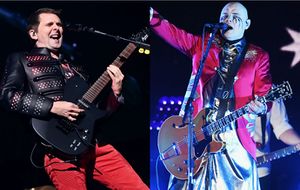 The jam consisted of the song Cherub Rock played instrumentally around two minutes, with the outro of Quiet.

At the same gig they also played the riff of Zero, in the Metal medley.

You can watch the jam here.

And you can listen the original songs;

Go back to Songs