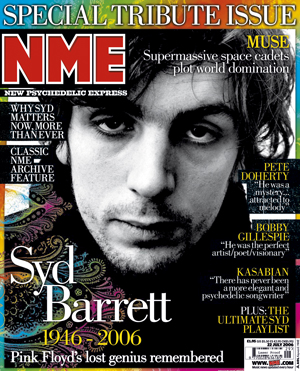 Set the controls for the heart of the charts

'Supermassive' was only the start, now Muse have their phasers trained on world domination

"Muse are peerless. We are the most unique band in the UK this decade." Matt Bellamy, singer and guitarist in the prog-tinged power-trio, is lounging before us on a velveteen sofa in a plush central London hotel. Dressed in white braces, white vest aand white trousers, he's the spitting image of the spiky-haired, tragically iconic Sid Vicious (crossed with Newcastle United manager Glenn Roeder).

"We exist, and have existed, on the fringes of every scene that has come along in the last 10 years. There's nobody like us and there's nobody doing what we do."

And he's on fine form, tossing forth self-confident missives like a man resolutely assured of his place within the world. And even more so of his band's place within rock.

Often absurd, occasionally preposterous, always brilliant, 'Black Holes & Revelations' is a record that sounds like the future was supposed to sound. Recorded in New York, France and Italy between spring 2005 and the early months of 2006, it's a work laboured by three young dudes from Teignmouth who never ceased taking bold steps in their ongoing quest to be the most forward-thinking band in Britain. It marks Muse's coronation as kings of boundary-battering, brain-bettering rock'n'roll.

A thrillingly disparate collection of songs that reference the breathy, throbbing funk of Prince, the studious, art-rock stutter of Franz Ferdinand, the filmic drama of Ennoi Morricone and even, on one occasion, the throaty, rock'n'roll of The Strokes ("I liked that Strokes song," says Matt of a composition he struffles to remember, though he does charitable hum a few bars for us. "I thought it sounded like Muse!")

'Black Holes & Revelations' is the most souped-up, stellar-charged record Muse have ever made, a career high point in a career of making souped-up, stellar-charged records. Consider the cosmos-groping love letter of 'Starlight', or the galloping prog-rock stampede of 'Knights Of Cydonia'. Heck, just listen to the first 10 seconds of recent lead-off single 'Supermassive Black Hole'! It sounds like sex! With robots!

Chris smiles a savvy, confident smile: "This is the best album we've ever made, I'm sure."

"It was a hard recording process," sighs Matt, "in that it took a lot of time. It's the biggest sense of achievement I've ever had after making an album though. I've come out of the studio before feeling a bit compromised. This time we've definitely got it right."

The album's melting pot of street-smart influences originated from Muse's time spent recording in the Big Apple at the tail end of 2005. A place of block parties and good vibrations.

"Going to New York tightened everything up," says Matt. "It got us more groove orientated."

"It was a vibe thing," nods Dominic Howard. "We found loads of positivity in New York. It's so fast and so busy and it's hard to feel so dark about stuff when you're surrounded by thousands of people. We started going out to clubs and started hanging out with friends, dancing."

Matt even took time out to do a spot of DJing.

"I got a little too into it," he smirks. "I didn't really know how to use the mixer properly, yet there was this moment where I was playin Depeche Mode, with a fag in my mouth, and people were asking what the tune I was playing was. I was like, 'This is what DJing is about...'"

Ask Muse what music was circling their orbit around this time and they'll speak of everything from early R&B records to angular guitar gems and electropop classics. Prod further and it's clear the general feelgood flava of NYC was also behind the anti-funk strut of 'Supermassive Black Hole'.

Described by Chris as their attempt to fuse their love of weirdo Belgian art-rock such as dEUS and Soulwax with the dynamics of, say, a classic Solomon Burke or James Brown cut, it sounds about as far removed from the claustrophobia and tetchy unease of Muse's back catalogue as you could imagine.

Yet it was almost never so. Way before New York drew out the funky beast embedded in Muse's soul, long before Matt relocated the band to his Italian villa for follow-up sessions his neighbour? George Clooney), the trio had begun the recording process back in 2005 in deepest Provence.

Holed up in the 17th-century Chateau Miraval, cherry-picked as a place where they could get away from the distractions of the internet, mobile reception, TV and other people, it was the perfect location for three fertile imaginations to thrive. Or not.

"Things got so secluded and detached in France that the vibe was getting dark there," shudders Dominic. "It was great at first, but then we started getting fearful of the world and being out there on our own. We started discussing World War III and what if the end of the world happened. There was a lot of paranoia there."

"I started looking inside myself a lot," adds Matt. "I was reading loads of books about the declining oil situation, and learning about wars that were going on that I didn't know anything about. I started envisioning a time when we were all squabbling like a scene from Mad Max. We just knew we had to get out of there. If we'd stayed in France for the whole of the album, it would have ended up total prog!"

He laughs. "Songs like 'Knights of Cydonia' would've been 20 minutes long! There were tracks we recorded that aren't on the album that are over eight minutes long. At one point we contemplated a triple album - the first disc being devolution of rock and the third being a load of twiddy synth noises."

"In France, we were constantly making things, but we never seemed to finish anything," concludes Matt. "When we relocated to New York, the vibe changed almost overnight. It was then that we decided to book Reading."

Muse's headling slots at this year's Carling Weekend: Reading and Leeds Festivals (going on after Arctic Monkeys: "Good band," says Matt with casual flippancy. "Should get the crowd warmed up") will be apt reward for their legions of bookish devotees - even more crazy than the Monkeys' fanbase.

"I think we appeal to the more fanatical side of people," asserts Matt. Chris agrees: "There was a cover of 'Knights Of Cydonia' floating around on the net, way before people had heard our version. We'd played it at Radio 1's One Big Weekend - nobody had heard the album version at that point - and they'd worked out how to play it from that. There was a link on our messageboard to a band who'd recorded it! It was frighteningly accurate, too..."

Seven years after they first came to our attention, 2006 marks the moment Muse rise from the clutches of their adoring acolytes into the rock overground.

He's right. Muse may never have been the biggest or most hyped, but circa 2006, circa 'Black Holes & Revelations', the might just be the best. Watch out Leeds. Watch out Reading. Watch out universe.