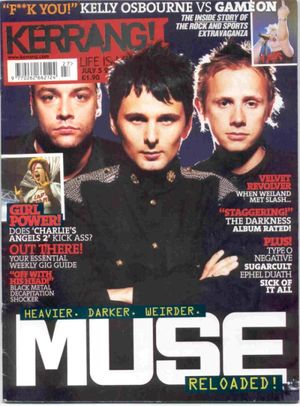 An article about Muse during the recording of Absolution, in a 2003-07 issue of Kerrang.

Matt Bellamy is in Los Angeles putting the finishing touches to Muse's maddest album to date. He's already freaking out the locals. And he hasn't even revealed his plans to live underwater yet...

STEP THROUGH the doors of LA's Standard Hotel of an evening and the first thing that will hit you is the noise, the noise outside of the bumper to bumper crush of cars as they crawl along Sunset Strip, shuddering with the steady thud of hip-hop on their way to their designated West Hollywood nightspot; the noise inside of the wall to wall crush of people already at their designated nightspot, clinking expensive drinks and struggling to be heard over the boom of the latest contemporary dance grooves.
The second thing you'll notice is the cool; it's everywhere. From the girl reclining in a glass box positioned above the reception desk, to the aggressively chinci decor that demands the presence of a shag pile rug of extravagant dimensions, to the realisation that the potential models/actresses/musicians you've just identified are actually just the staff, or simply the fact that every movement here seems governed by the need to generate new definitions of the word self-conscious.
It's not the ultimate in LA high life exclusivity, (for that there's the Sky Bar a few doors down Sunset Boulevard), but as an amplifier for all the city's soulless, plastic overtures of excess, it is the kind of place that could start to make demands on your sanity if you spend too much time - say, 24 hours - there.
Muse have been there for 24 days, applying the finishing touches to the follow-up to their 'Origin Of Symmetry' album. This might explain why vocalist Matt Bellamy chose to top off the previous night's slog at the studio with a swim - not in the hotel pool you understand, but on the luxuriant rug.
"I looked around, saw a lot of people really trying to keep their cool and thought 'I'm going to have to lose mine really quickly to prove a point'," he says, sitting by the bustling poolside terrace, demonstrating his dry swim offensive with a series of angular movements that are to cool what 'The Office''s David Brent is to dancing.
If the singer hasn't endeared himself to LA's fashionably minded masses, then that's fine by him. He gestures at the heaving mass of silicon-enhanced nightlife taking place around him.
"It's not really something to aspire to, is it?" he smiles.

IF DEPTH of personality is something ill-suited to the artificial nature of the interview process, then it's a fact not lost on Matt Bellamy. Sitting back at the Standard on an unusually cold May evening, the singer is trying to turn a mind, previously attuned to the demands of the studio, to the first set of promotional duties he's had to face all year. An air that's somewhere between unease and faint irritation tells you that it's something he might currently place below having his fingernails removed. Some of this is down to the fact that it's late, but he'll admit to a fear of being "too open" and "devaluing" the music. Not that this prevents him from answering any question that's put to him. At once Muse's most talkative and least relaxed member, Bellamy's answers, usually delivered at great length and ridiculous speed, and more often than not, bookended by a stream of nervous laughter, are such that you wonder just how he ever earned the tag of arrogant little prick.
Certainly his outlook now seems governed by a sense of back to basics, primary living. Ask him what's been important to him in the time Muse have had out of the spotlight and - the new album aside - he says he's been trying to get the personal side of his life together (he moved in with his girlfriend at the end of last year) after 'Origin Of Symmetry's Olympiad of excess left him with little sense of self.
"It had a big effect on me," he admits. "I changed. Very much. And I haven't really gone back to who I was before."
"When it all started kicking off, I made a point of going forward and forgetting about it all," he continues. "I don't know why. But I think... I mean... I can't really remember who I was any more. There's whole sections of my life that I can't remember - everything that was my life up until I was about 20 is gone. So I'm trying to have things I'm going to remember in my life other than touring and making albums."
When Matt Bellamy says all of this, it all seems candid enough. But it's hard to get any emotional gauge on him amid the giggles of quickfire delivery. Ask him if the lack of memory is a bad thing or whether he thinks he's changed for the worse, and he can't (or won't) say. Equally, ask him how he feels about being labelled as one of rock's budding eccentrics and he'll dismiss the notation out of hand, saying it's a confusion made between his "mad professor" musical personality and his everyday self. Start pushing for details on aspects of that everyday self away from Muse and he'll point out - not unreasonably - that to talk about his private life defeats the object somewhat. Although you can imagine that chez Bellamy isn't always the most conventional place to be. This after all is a man who has just confessed to a love of "dressing up".
"As soon as I'm home I'm in costumes, start to finish," he begins, probably regretting that he has. "I like to dress up very much. But I don't really do it in public."
Why not?
"Um," he shudders to a stream of giggles. "The things I like to dress up in are not necessarily that cool."
Go on! Chicken suits? Emperor Ming?
"I can't I can't!" He wails, hilariously flustered for the first and only time during the interview. "It's all behind closed doors. Closed doors."
He leans in.
"And I have a very good time. Trust me."
Face it, you're intrigued.

THE FOLLOWING day, as his bandmates sit by the pool, easing themselves into the day after a rare night out, the singer, who opted instead for a night in to watch Larry Clark's p?ean to underage excess, 'Kids', is set in the hotel lobby that, empty and by day, is a whole lot less imposing. He's immediately far more personable than the edgy character of the previous night - although you know you're unlikely to get any more of a handle on him when his opening gambit asks, seemingly without irony, if I think "that kind of stuff [in Clarke's film] really happens?".
Still, it seems like a good enough opportunity to ask him whether we'll be seeing any return to the 'kind of stuff' that informed much of the Muse touring experiences last time round, when the band hit the road in late summer for a spate of promotional shows. The fact that he names the relative "anonymity" that comes with playing alternative music as a benefit, and not the uses that its fame can bring suggest that some views have been reappraised.
"I've gone off the whole thing," he says, recounting the days when they'd hold masked backstage parties for obliging revellers. "I mean, we honestly had a go, we really did try to socialise. We were so overwhelmed that people were into the music, we wanted to turn touring into something that was more than just a gig and more than just a goodbye. It worked for a while, but as we got bigger, the crowds got younger and the parties just turned into signing sessions . And then a few things happened here and there and we had to knock it on the head."
"Besides", he adds, "I can't think of anything more unattractive than someone wanting to have sex with you for what you are onstage"
This makes you wonder how Bellamy is going to deal with the sudden increases in fame and attention that the new album could well bring. He reckons that should things blow up worldwide for the band, he'd go the route of Michael Jackson-("but without children") style eccentricity.
"I'll go and buy and island and live underwater in a re-breather with Kleenex boxes on my feet," he laughs. "Creatively, though, I'm pretty balanced. I can walk around and still get on with what I want to do, and I'd be worried if that changes."
By the time you read this, Matt Bellamy will have celebrated his 25th birthday. Ask him for a flippant appraisal on his life right now and you might be surprised, as someone in one of the biggest bands in the UK about to drop one of its biggest releases this year, to hear him describe it as "nerve wrecking". Then again, so is he.
"I've never been nervous at this stage before," he says pensively, noting that, since there's nothing concrete yet on his horizon that deserves it, this probably isn't such a good sign. "Because if I'm nervous now," he says to a flurry of giggles. "Maybe I'm going to become...hysterical."
Somehow, it seems an unlikely outcome. The moment my tape recorder stops, he's up, grabbing a banana milkshake, challenging me to a game of table tennis and firing off his own questions in a manner so disarmingly normal as to suggest his date with the bottom of the sea is actually a long, long way off.
Because for a band so often accused/mislabeled of pretension, arrogance and eccentricity, it's to Muse's credit that where so many bands have developed such an inflated sense of self over so much less, they can still retain a sense of curiosity for and interaction with their surroundings (the current artificiality of which only serve to heighten the divide). Whatever the coming months bring for this bold, original trio, it's unlikely to throw them off course. Then again, it seems that you can never be quite sure of what the last word is with this band.
"You've definitely caught me at a reasonably honest moment here," giggles Bellamy, as we leave this likeably unlikely rock star, milkshake in hand, to catch the first few faint rays of sun that have appeared all weekend. "And when it all does go boom! I'll just turn into the person that talks crap and rants on about bullshit all the time."

MUSE will preview their stunning third album with the release of a new single 'Stockholm Syndrome' on July 14. For the first time ever, the single - described by Matt Bellamy as "definitely one of the heaviest songs we've ever done" - will not be stocked in record stores, but instead be made available for download for a limited period from Kerrang.com and the official Muse site www.muse-official.com. Burning the tracks onto CD will cost £1 (£1.50 for SMS payments), after which you'll be able to judge for yourself whether Muse's new album is indeed "fat as f**k" as the Devon trio claim!

Go back to Kerrang magazine