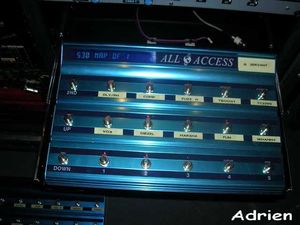 The All Access as a stand-alone foot controller can be completely customized for your gear requirements. It can be set up to your specs in three operating modes: Bank Mode, Song Mode and Remote Mode.

Song Mode allows up to 150 songs to be stored with 15 presets per song. The 10 sets allow placement of 50 songs per set.

Remote mode automatically programs the footswitch to match Rocktron remote-compatible units. Titles and individual switch functions will automatically program and continuously update themselves on both the rack unit and the All Access foot controller. Functions like tap delay, mute, boost and effects on/off instantly appear when connected to a Rocktron remote jack without any programming.

Paul English (Bellamy's Guitar Tech) on the Rocktron: "All settings are changed by MIDI using the Rocktron All Access and we use an immense amount of MIDI channels for Matt's setup alone. I think there are around five Rocktrons on stage, Matt has one, so do Shane and I, All three of us control different parts during the gig and the numbers on the set list represent MIDI channels and patches within. There are many patches within the channels, so if you're on Channel 30, which is Hysteria, within it there are 15 different patches".

For the Black Holes and Revelations Tour Matt had it set up so that the bottom row of 5 switches for changing patches within easch song and the middle and upper rows of switches as a virtual pedalboard, this was he could add extra effects if he wanted them and wasn't tied down to what was already pre-programed, this can be clearly seen in the above photo.

Back to Guitar effects