A review in the October/November issue of Rip It Up, of the 2004-09-14 Auckland gig. This transcription is incomplete due to partial scans. 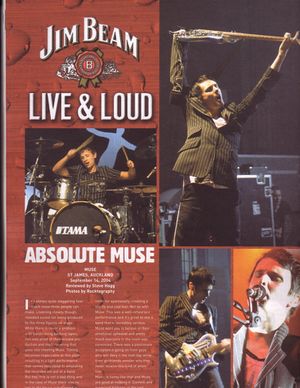 It's always quite staggering how much noise three people can make. Listening closely though, revealed sound not being produced by the three figures on stage. While there is never a problem with bands using backing tapes, this was proof of the intricate production and multi-layering that goes into creating Muse. Timing becomes impeccable at this point, resulting in a tight performance that comes very close to emulating the recorded out put of a band. But hey, this is not a bad thing and in the case of Muse there was no one in the house complaining as they ran through note perfect renditions of their material. Tight is good but it often doesn't leave much room for spontaneity, creating a sterile and cold feel. Not so with Muse. This was a well-rehearsed performance and it's great to see a band that is incredibly serious. Muse want you to believe in their emotional upheaval and pretty much everyone in the room was convinced. There was a passionate acceptance going on from guys who will deny it the next day while their girlfriends wonder why they never receive this kind of attention. Music is funny like that and Muse are good at milking it. Confetti and oversized balloons at the end– nice touch– bought a few tears. Ups to the bass player for playing with a broken wrist.

Go back to Rip It Up